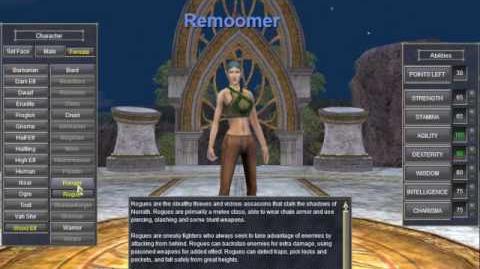 Character creation is the first step to start playing EverQuest. All players are required to create a custom character before starting the game, and you can create further accounts if you have free character slots.

At this point you can chose everything about the graphic aspects of your character and as well the role you want to perform in game.

In modern versions of EverQuest you have sixteen available classes and each class performs a different role. The difference between classes is most noticeable in combat.

"Tank" classes are intended to act as protection for classes who are less durable. "Damage Per Second" or "DPS" classes focus on dealing the most damage to targets. Healers are focused on restoring health to damaged characters.

In the most recent version of EverQuest, there are sixteen playable races. Not all classes are available to a race, and each race has a different selection of available classes to choose from.

In all versions of EverQuest, you can modify how your character looks. When creating a character while using the old, low polygon count character models (either by playing on a server that does not run EverQuest: The Shadows of Luclin or later expansions, or by using the game configuration menu to disable "detailed models" for races other than the Drakkin and Froglok), the customization is limited to a selection of a few textures used for the face. Characters using models introduced after the third expansion have more options, including character heritage, face texture & model, hair model, hair color, eye texture & color, facial hair texture, facial hair color, tattoo, and other details. Not all races and genders can use all options listed in the menu. Changing the face of characters of certain races such as the Vah Shir and the Froglok will also change his or her body color along with the face texture, though this is not true for the majority of the races.